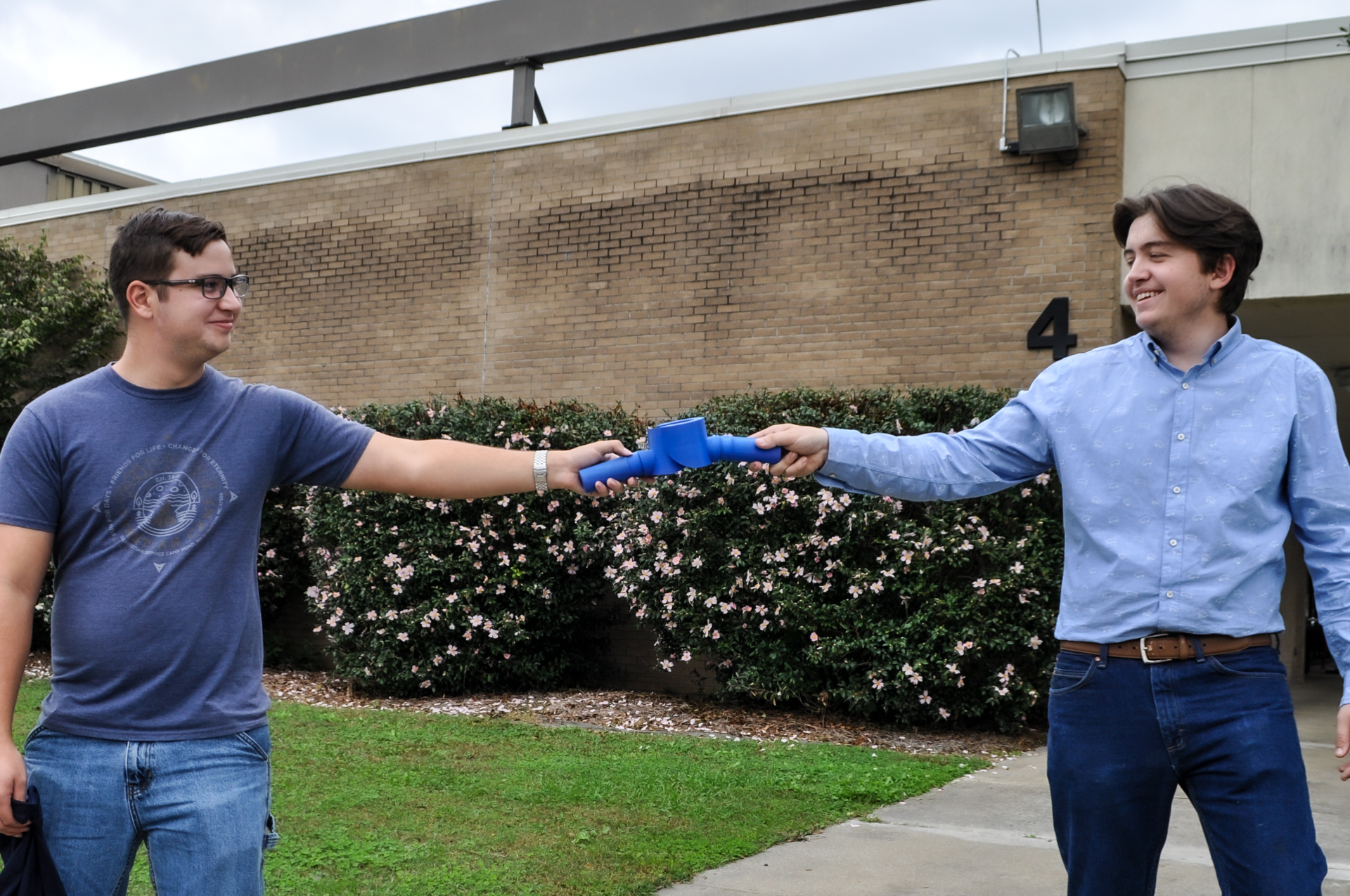 A 3D printer takes a design that a student creates in a CAD (computer-assisted design) program and builds it as a three-dimensional object using plastic or other inputs.

“The machine guides a piece called a hot end–it’s the same technology a hot glue gun would be," explained Ledford. “The hot end is put on a carriage that is guided by motors to certain coordinates to create pretty much any shape you can imagine.”

The shape is created from bottom to top by melting a filament into hundreds, if not thousands of layers. “Basically, it looks just like weed eater string. It comes on a spool; it’s made out of plastic.”

Though plastics are most common, different types of filaments can be used to give the printed object desired qualities. The most popular filament among hobbyist is PLA, a corn starch-based plastic. Filaments can also contain wood pulp, rubber, or metal to mimic the properties of those materials.

Jacob Van Gyzen explained why the technology is so important to manufacturing. “In the industrial world, 3D printing is used for prototyping. I need to make something new and I have my first draft of it. I don’t really want to make one out of metal. I can print one and look at the specifications. It’s much quicker and cheaper than making one out of metal.”

Before 3D printing, prototypes would have either needed to be molded or cast out of wax or metal. These processes are time-consuming, expensive and more prone to error.

In fact, the technology is so accessible that Ledford built his own for his senior high school project. Ledford’s civics and economics teacher William Prettyman introduced him to the technology. Using another 3D printer, Ledford took stock motors and combined them with structural parts that he designed and printed himself. He used his new printer to prototype fishhooks for a commercial tuna fisher.

“I was seeing the hooks he was using were always failing. They’re made quite cheaply and they don’t last long. The sharks off the coast, they absolutely demolish them,” said Ledford. So using his printer, Ledford has developed new hooks, had them field tested, and continued to create new prototypes.

“I do believe I have done my last prototype,” he said contently.

As a class project, everyone is working together to design and print a Lego person at three-times scale. Students measure and design the parts in a CAD program and then print them to see if they will all fit together properly. As a joke that has now turned into a side project, Van Gyzen wanted to make Lego hands that were capable of holding a Red Bull-sized aluminum can. The students now stay after class designing this new 19-times-scale project.

3D printing has brought the cost of prototyping down and sped up the process to where students like Ledford can consider themselves hobbyists of a technology that was once strictly industrial. This efficiency also brings down the cost of failure, driving innovation. The students can create wild new projects at little cost in time or materials. Students continue to sharpen their design skills and problem-solving skills­–literally in the case of Ledford’s tuna hook–using this accessible technology.

The two students stay after class to talk about recycling plastic bottles into new filament so that they can build their three-foot-tall Lego man out of recycled materials. They dream big, and when the printer is too small to print their dreams, they build a larger printer.

3D printing is just one class in the mechanical engineering technology program. Students can apply now and sign up for spring classes.

Early registration under way at BCCC