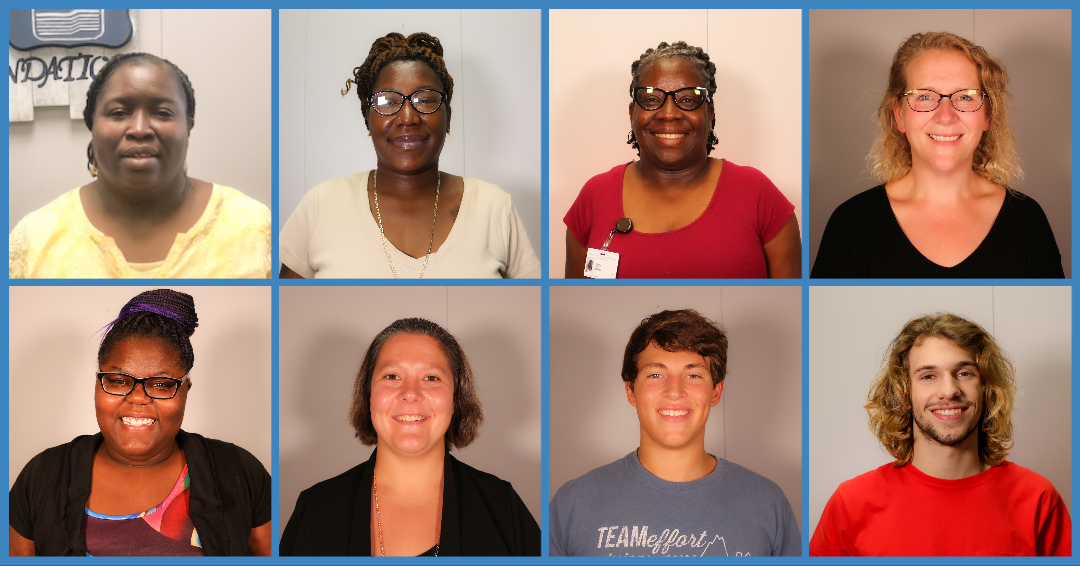 The Beaufort County Community College Foundation is proud to announce the following scholarship recipients for the Fall 2021 semester. These are just a few of our recipients. Early Registration is on-going for the Spring 2022 semester. While the Beaufort Promise covers all tuition and fees through May 2023, students can apply for scholarships to cover the cost of textbooks.

Deloris Clemons, 55, received the David & Terri McLawhorn Scholarship. The Greenville resident is in the LPN to ADN nursing program. She attended John A. Wilkerson High School. She also has her Certificate in Nurse Aide I and Nurse Aide II. She is a mother of six, the wife of Anthony Clemons, and the the daughter of Calvin Williams of Plymouth. Clemons is an assistant manager at the John Small Elementary School Cafeteria.

Dr. David McLawhorn initiated this endowment in 2004. As president of BCCC from July of 2001 through May of 2012, Dr. McLawhorn wanted to create a fund that would supplement the work of the Foundation by providing scholarship to students who demonstrate need and academic promise.

Christy Edwards, 41, received the Vidant Health & Myrtle Cutler Jones Scholarships. The Greenville resident is a practical nursing student. She attended J.H. Rose High School, and plans to become a family nurse practitioner. She also holds a Certificate in Medical Assistant . Edwards is a mother of four, and is the daughter of Lena & David Wooten of Greenville.

The Vidant Beaufort Health Scholarship is available to qualified students from nursing, MLT, nursing assistant, phlebotomy and any other curriculum or continuing education medical-related field.

Established in 2002 by the family of Myrtle Cutler Jones, this fund provides an annual scholarship to a second year BCCC student in a medical technology program. Jones, a Beaufort County native, recognized the importance of a medical facility in a rural community. She wanted her estate to benefit students in the medical field. Recipients must have at least a 3.0 GPA.

Cynthia Jones, received the Harold & Louise Lane Scholarship. The New Bern resident is a practical nursing student. Jones attended Pamlico High School, and she currently works at CarolinaEast Medical Center as a patient care technician II. She is a mother of one and the daughter of Odessa and Maceva Jones of Vandemere, N.C.

Established in 1998 in memory of Harold Alton Lane, Jr., and in honor of Constance Lane Howard, by their parents Harold Lane, Sr. and his wife Louise, this endowment provides annual scholarships to one or more students in the nursing and or an associate degree program.

Crystal Maxwell, 39, received the Tayloe’s Hospital Pharmacy Medical and the Louise R. Lester Foundation Scholarships. The Plymouth resident is a nursing student. She attended Plymouth High School, and she plans to become a family nurse practitioner or a physician’s assistant. She holds an Associate in Applied Science in Physical Therapy Assistant. She is the wife of Jonathan Maxwell and a mother of two. She is also the daughter of Douglas and Teresa Norman. She currently works at Vidant North Hospital as a physical therapy assistant.

Candice Shepard, 30, received the James Franklin & Hannah Bagwell Endowment Scholarship. The Greenville resident is a medical office administration student. She attended North Pitt High School. Shepard is currently a receptionist at the Greenville Aquatics and Fitness Center. She plans to become a medical coder in the future, and she has an Associate in Applied Science in Early Childhood Education. She is the daughter of Anntroinette Hines.

Emilou Spruill, 34, received the J. Bonner Paul Sr. Scholarship. The Washington resident is a pre-nursing student. Spruill attended Creswell High School. She is the daughter of Charles and Freda Phelps of Creswell, a mother of one, and the wife of Danny Spruill. She plans to work as a labor and delivery nurse. Spruill also holds a Master in Extension Education.

J. Bonner Paul’s wife Lillian, and Bobby Hodges, vice president of Paul Funeral Home, created this endowment on November 23, 2008 to memorialize his successful career and numerous civic contributions to Beaufort County. Mr. Paul joined his family’s mortuary business in 1937 and shaped it into a company synonymous with compassion and service. He was active in numerous civic, church, and professional organizations throughout his life. The scholarship provided by this endowment is awarded annually to a business or nursing student attending BCCC.

Dillon Taylor, 19, received the David Clark Scholarship. The Williamston resident is part of the electrical engineering technology program. Taylor attended Riverside High School and plans to work as an electrical engineer. He is the son of Roy and Lucy Taylor.

The David Clark Endowment was established in 2011 by Trader Construction Company-New Bern, NC and Potash Corp-Aurora, NC in memory of David Clark. David was a Trader Construction Company superintendent with more than 30 years of industrial construction experience. He was an exemplary employee and excellent role model for his fellow co-workers. He was also a man of faith, community involvement, and a native of Beaufort County, NC. This endowment is available to BCCC students in any of the industrial technology programs­–automotive systems, electrical engineering, electronics engineering, mechanical engineering, or welding.

Dawson Woolard, 18, received the David Clark Scholarship. The Washington resident is a mechanical engineering student. He attended Washington High School and currently works as a manager at Diversion Escape Rooms. Woolard plans to work as an engineer in the future.

The David Clark Endowment was established in 2011 by Trader Construction Company-New Bern, NC and Potash Corp-Aurora, NC in memory of David Clark. David was a Trader Construction Company superintendent with more than 30 years of industrial construction experience. He was an exemplary employee and excellent role model for his fellow co-workers. He was also a man of faith, community involvement, and a native of Beaufort County, NC. This endowment is available to BCCC students in any of the industrial technology programs–automotive systems, electrical engineering, electronics engineering, mechanical engineering, or welding.